In my MS clinic, I have to continually work on a narrative to explain to pwMS why they are getting worse despite having no evidence of disease activity. The following is a draft of a paper I am working on. Does it make sense? Is it too complicated? Does it need pictures? Thanks. 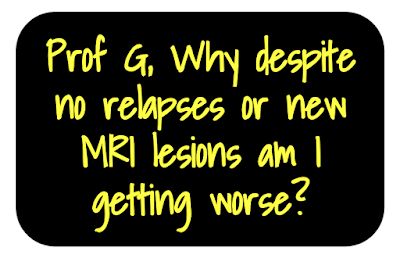 Disease worsening or disability progression in MS can be explained under 4 headings:

1. SS (scissors and stripper): The acute focal inflammatory lesion acts like molecular scissors and strippers, cutting axons and stripping myelin off axons. The cut and naked axons are blocked from conducting signals and result in a neurological deficit. The neurological deficit from this acute conduction block will vary depending on the pathway affected, for example, if the lesions affect the optic nerves it will cause loss of vision. The way to prevent the SS from causing conduction block is to prevent new lesions from forming.

2. EF (energy failure): The demyelinated axons may recover function by a process called axonal plasticity or remyelination. Axonal plasticity is the process by which the neuron inserts new ion channels into the demyelinated axonal segments and restores conduction. Remyelination may also occur, but the new myelin is never as thick and as efficient as the old myelin and is susceptible to intermittent failure. These demyelinated and thinly remyelinated sections of axons are susceptible to temperature and fatigue. If the temperature rises these sections block and if the axons are used too much, for example with exercise, they run out of energy and also block. Sometimes the type of ion channel that is inserted into the axons fire spontaneously can cause intermittent symptoms, for example, pins and needles, pain, neuralgia and muscle spasms. As these ion channels are sodium channels it explains why these intermittent symptoms respond to drugs that block sodium channels, for example, carbamazepine, oxcarbazepine, phenytoin and lamotrigine.

Another process that helps with recovery is that the surviving axons form sprouts to reconnect disconnected pathways and create new synapses, which are the connections between nerve fibres. All these processes increase the energy requirements of the axon, which makes it vulnerable to die-off later. At the same time the ‘MS lesion’ remains inflamed and some of the chemicals produced as part of the inflammation poison the mitochondria, which are energy factories of the axons. A further reduction in energy production puts further stress on the system. As a result of these processes, there is a delayed dying off of axons that takes place over months to years after the initial MS lesion has formed. This delayed dying off of axons explains why despite effective treatments stopping new MS lesions from forming some people with MS still notice a slow deterioration in their functioning.

3. SB (slow burn): Some MS lesions never recover and become slowly expanding lesions or SELs. SELs have a rim of hot microglia at their edges and continue to swallow up the myelin and axons of the surrounding ‘normal-appearing’ tissue. These lesions don’t have much acute inflammation left in them, i.e. there are very little T and B cells in these lesions. SELs continue to expand over years to decades and are responsible for the slow accumulation of damage over many years. SELs can be seen on MRI; they typically cause black holes on so-called T1-weighted MR images and have a dark rim of iron around them when viewed with special MR sequences (susceptibility imaging). The iron rim is a marker of these so-called ‘hot microglia’.

At present we have no idea what causes some MS lesions to regress and recover and for others to expand and become SELs. What we do know is that our standard anti-inflammatory DMTs have very little or no effect on SELs once they have developed. It is important to realise that SELs are found throughout the course of MS and are even seen in people with a radiologically isolated syndrome (RIS) or asymptomatic MS. In other words, the so-called ‘progressive MS pathology’ is found very early in the MS disease course. We do know that the number and size of the SELs increase with disease duration, i.e. the more MS lesions that develop the more SELs will be formed. Another important observation that has recently emerged is that a single strategically located SEL can cause an extraordinary amount of damage; for example, a single SEL in the so-called pyramidal tract or motor pathway can cause progressive weakness down one side of the body. I have a few patients like this and it is very disheartening when their weakness fails to respond to standard anti-inflammatory therapies.

An interesting debate is whether or not the ‘hot microglial’ response is abnormal, i.e. pathological, or is occurring in response to something in the surrounding tissue. I support the latter view and hypothesise that there is something in the surrounding tissue that is activating the microglia and they are just doing their job and trying to clear-up the inciting agent. Others have suggested these microglia are responding to the back-end, or Fc-end, of antibodies and activated complement components as a result of these antibodies reacting with their target or in a non-specific manner. Other hypotheses include viruses, e.g. EBV and HERVs, are driving the expansion of these lesions. The way to test these two competing hypotheses is to use drugs that switch off or suppress microglia. If the ‘hot microglia’ are the problem these drugs will work and stop SELs getting bigger. If the microglia are just doing their ‘job’ these agents are unlikely to work. It is also important to remind you that myelin debris inhibits remyelination so these microglia may be needed to help with the repair. The problem is that without being able to switch off the abnormal processes that are causing SELs to enlarge trying to stimulate repair mechanisms may be futile.

Another factor that can’t be ignored is recurrent infections, which sometimes affects a lot of people with advanced MS. Recurrent urinary tract infections (UTIs) are the biggest problem. This is why we take UTIs so seriously. Every time you get an infection it causes your immune system to produce cytokines, or inflammatory messengers, that travel to the brain and boosts the activity of the microglia. The hot microglia then exacerbate the damage that MS is doing to your brain and spinal cord. This is why many of you tolerate infections so poorly and often don’t recover back to baseline after a severe infection. There is a lot we can do to reduce recurrent bladder infections. For example, the judicious use of intermittent self-catheterisation, drinking lots of liquids to flush the bladder, using urinary antiseptics to suppress the growth of bacteria in the bladder and screening for asymptomatic UTIs using self-monitoring home dipsticking and prompt treatment.

The upshot of ‘slow burn’ is that we need additional therapies to add on top of DMTs that stop new lesions, and in particular chronic expanding or SELs, from forming. These treatments may be drugs to purge the CNS of antibody-producing B cells and plasma cells, drugs that inhibit complement activation and/or the activation of Fc receptors on microglia, anti-virals that target EBV and HERVs, and/or drugs that inhibit activated microglia. In other words, there are many therapeutic targets that still need to be explored as add-on therapies in MS.

4. PA (premature ageing): Most of you are aware of the effects of ageing on the nervous system. The brain and spinal cord were never designed by evolution to last longer than about 35 years. It is only relatively recently that as a species we have extended our lifespans. Once you go beyond approximately 35 years of age there is a gradual loss of nerve cells and axons. This explains why as you get older you notice the effects of ageing; reduced vision, loss of hearing, poor balance and sadly age-related cognitive impairment. In short, life is an age-dependent neurodegenerative disease. If we all live long enough we will all develop cognitive impairment. What protects us from age-related changes is so-called brain reserve capacity, i.e. the size of the brain and spinal cord, and cognitive reserve, which relates to education level and environmental enrichment (social capital, adult learning, cognitive exercises, etc.). We know that MS reduces both brain and cognitive reserve and as a result people with MS experience the impact of ageing much earlier. I refer to this as premature ageing. Can we do anything about this? Yes, we can. We know from studies in the general population there are many things that you can do to maximise your brain and cognitive reserve. This is called Brain Health and involves lifestyle factors such as exercise, diet, sleep and avoiding smoking and excessive alcohol consumption. It is also important to be screened for comorbidities or other diseases and have them treated; these include smoking, hypertension, diabetes, obesity and abnormal lipids. As for diet, there have not been any that have been studied specifically in MS. However, data from animal and other studies indicate that calorie restricted, intermittent fasting and ketogenic diets have the most promise with regard to brain health. However, we need more evidence of their beneficial effects before promoting these to pwMS.

Ageing is also a biological process and as we decode the molecular programmes that cause ageing we may be able to develop treatments that reverse ageing. An example of this is metformin, a drug for treating diabetes has recently been shown to reprogramme oligodendrocyte precursors in older animals to behave as if they were young cells and become more efficient at remyelinating axons. I envisage in the future using anti-ageing drugs as add-on therapies to treat MS.

Many of you will be tired of hearing me speak about Brain Health, but if we want to maximise the outcome for pwMS we need to treat MS holistically and that means living a Brain Healthy life and for us to offer you a brain health and wellness programme. The big challenge is getting the NHS to fund this initiative. When I suggested to my previous manager that I wanted to start an MS Wellness clinic he laughed; C’est la vie!