Yes, I agree the cause of MS has to explain the changing sex ratio of the disease. 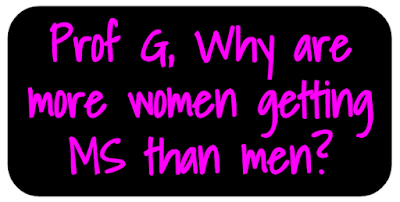 To prove that MS is caused by a single factor or the interaction of several factors, it has to explain everything we know about the epidemiology of the disease. In terms of EBV being the cause of MS, how does EBV explain why RRMS is becoming more common in women? In comparison, the incidence of PPMS seems to remain constant with an equal number of men and women affected.

One observation that has been noticed across several populations, but not all, is the increasing incidence of MS in women. Why is this occurring? Some of it may be due to the change in smoking prevalence amongst women, which has been increasing relative to males. An outlier here is Iran, which has a sex ratio of F:M of close to 5:1 and is one of the countries where less than 10% of women smoke. I am not convinced that smoking explains the changing sex ratio of MS incidence.

Some blame cultural factors, for example, the addition of UV blockers in cosmetics over the last 20+ years and other cultural changes causing women to shun sun exposure.

BACKGROUND: Incidence of multiple sclerosis is thought to be increasing, but this notion has been difficult to substantiate. In a longitudinal population-based dataset of patients with multiple sclerosis obtained over more than three decades, we did not show a difference in time to diagnosis by sex. We reasoned that if a sex-specific change in incidence was occurring, the female to male sex ratio would serve as a surrogate of incidence change.

METHODS: Since environmental risk factors seem to act early in life, we calculated sex ratios by birth year in 27 074 Canadian patients with multiple sclerosis identified as part of a longitudinal population-based dataset.

BACKGROUND AND PURPOSE: In a longitudinal population-based dataset of patients with multiple sclerosis (MS), we have previously observed a substantial increase in the female to male sex ratio in Canada over the last 50 years. Here, we aimed to determine whether this change in sex ratio is related to the clinical course of MS.

METHODS: We calculated sex ratios by birth year in 11 868 patients with relapsing-remitting (RR) MS and 2825 patients with primary progressive (PP) MS identified as part of the Canadian Collaborative Project on the Genetic Susceptibility to MS.

CONCLUSIONS: An increase in the number of female RR MS patients over time accounts for the increasing sex ratio of MS.

Kampman et al. Sex ratio of multiple sclerosis in persons born from 1930 to 1979 and its relation to latitude in Norway.J Neurol. 2013 Jan 6.

A remarkable increase in female to male ratio of multiple sclerosis (MS) is recognised in high incidence areas. Norway is a high-risk area for MS, spanning latitudes 58-71°N. We studied whether the sex ratio has changed over time and whether it differs by clinical phenotype or by latitude. Population-based epidemiological data and data from the Norwegian MS Registry on patients born from 1930 to 1979 were combined in this study. Place of birth was retrieved from the Norwegian Population Registry and information on clinical subtypes was obtained from the Norwegian MS Registry. The female to male ratio ranged from 1.7 to 2.7 (median 2.0) in 5,469 patients born in Norway and increased slightly by 5-year blocks of year of birth (p = 0.043). The sex ratio was 2.6:1 in 825 patients born 1970-1979, which is significantly higher than in those born 1930-1969 (p < 0.001). In patients with relapsing-remitting onset, the sex ratio was 2.4:1, while it was 1.1:1 in those with primary progressive disease. The sex ratio did not differ between the south, the middle and the north of the country. The overall sex ratio of MS is strongly determined by cases with relapsing-remitting onset. We did not observe the remarkable increase in sex ratios of MS reported from other high-risk areas. The high sex ratio in the youngest birth cohorts may change as an increasing proportion of cases in this age group is being diagnosed. Sex ratio was not associated with latitude.

Objective: The aim of this study was to analyse any change in sex ratio in multiple sclerosis in the Swedish population.

Conclusion: There is no evidence for an increasing women-to-men ratio with time amongst Swedish multiple sclerosis patients.

BACKGROUND: A female/male (F/M) ratio increase over time in multiple sclerosis (MS) patients was demonstrated in many countries around the world. So far, a direct comparison of sex ratio time-trends among MS populations from different geographical areas was not carried out.

OBJECTIVE: In this paper we assessed and compared sex ratio trends, over a 60-year span, in MS populations belonging to different latitudinal areas.

METHODS: Data of a cohort of 15,996 (F = 11,290; M = 4,706) definite MS with birth years ranging from 1930 to 1989 were extracted from the international MSBase registry and the New Zealand MS database. Gender ratios were calculated by six decades based on year of birth and were adjusted for the F/M born-alive ratio derived from the respective national registries of births.

CONCLUSIONS: Our results confirm a general sex ratio increase over time in RRMS and also demonstrate a latitudinal gradient of this increase. These findings add useful information for planning case-control studies aimed to explore sex-related factors responsible for MS development.