What does 2019 hold for the various Barts-MS campaigns? 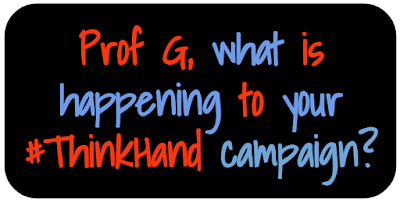 We are continuing to make the case for our #ThinkHand campaign with several outputs in 2018, which are being used to support our work in this area. I am very proud that ORATORIO-HAND, a phase-3b study of ocrelizumab in PPMS, which will include patients with an EDSS of up to 8.0 and will start recruiting in the first quarter of 2019. The primary outcome in ORATORIO-HAND is the 9-HPT; this in itself is a first and a major milestone for the field of MS.


In parallel, DrK has been working very hard to get his NIHR funded trial off the ground called CHARIOT-MS. DrK’s perseverance has gotten the study through round 1 of peer-review and we are now waiting to hear whether or not the study will get funded. CHARIOT-MS is a study of oral cladribine in advanced MS will target both SPMS and PPMS up to an EDSS of 8.5 and again the primary outcome will be the 9HPT.


These two studies are remarkable for several reasons. Firstly, these trials are challenging the dogma that MS is not modifiable beyond EDSS 7.0, secondly, it is shifting the focus away from the lower limbs and EDSS to a new primary outcome the 9-HPT and, finally, it is giving people with advanced MS hope in valuing their hand function and independence.

As part of our #ThinkHand campaign Alison Thomson, our research designer, in collaboration with the Agency of Design, helped design an upper limb rehabilitation tool called under&over, which we launched at ECTRIMS-2018 in Berlin. We have now been successful in obtaining a grant to test whether or not under&over will work as a rehab tool and are planning a remote web-based study to test it. Again our primary outcome will be stabilisation, or improvement, in the performance of the 9HPT only this time we will be using our cardboard 9HPT.


Interestingly the telerehabilitation study below showed that remote rehab can work. I see no reason why a web-based rehab programme won’t work either. We will obviously keep you posted on this study, we may even be given permission from the ethics committee to recruit via our blog.


Would you be interested in helping us design the study and/or participating?


A prospective, randomized, three-arm, evaluator blinded study to demonstrate the feasibility of a telerehabilitation (TR) program in individuals with ambulatory deficits secondary to Multiple Sclerosis (MS) and evaluate its efficacy when compared to conventional on-site physical therapy (PT) was completed. Thirty participants were evaluated at baseline and randomized to one of three groups with intervention lasting 8 weeks: Group 1 (control)- customized unsupervised home-based exercise program (HEP) 5 days a week; Group 2 (TR)- remote PT supervised via audio/visual real-time telecommunication twice weekly; Group 3 (PT)- in-person PT at the medical facility twice weekly. Outcomes included patient reported outcomes (PROs) obtained through questionnaires, and measurements of gait and balance performed with bedside tests and a computerized system. Functional gait assessment improved from baseline in all three groups. There were no significant differences between the TR and the conventional PT groups for a variety of outcome measures. TR is a feasible method to perform PT in persons with MS and has comparable efficacy to conventional in-person PT as measured by patient reported outcomes and objective outcomes of gait and balance.


CoI: The design, development and manufacture of the under&over rehab tool and the follow-on web-based rehab study has been kindly funded by unrestricted grants from F. Hoffmann-La Roche AG.