Multiple Sclerosis (MS) is a chronic, demyelinating, inflammatory disease of the central nervous system (CNS) with a strong autoimmune component. Several genetic and environmental factors have been suggested to contribute in MS. The Epstein-Barr virus (EBV) is one pathogenic candidate proposed to be involved in the onset of MS and/or induction of subsequent exacerbations. The possible involvement of EBV in MS is highlighted by a number of national epidemiological studies showing a higher percentage of EBV seropositivity. This study aims to evaluate for the first time the seroprevalence of EBV in Cypriot MS patients. The serum of 133 MS patients and 101 healthy controls (HCs) was used to determine the positivity index of the EBV nuclear antigen-1 (EBNA-1) IgG, viral capsid antigen (VCA) IgG, and early antigen-D (EA-D) IgG, using ELISA. All MS patients were seropositive for both EBNA-1 IgG and VCA IgG as compared to 94.1% (Fisher’s exact test, p = 0.0059) and 93.1% (Fisher’s exact test, p = 0.0025) of HCs respectively. Furthermore, the positivity indexes of both antibodies were significantly higher in MS patients. There was no significant difference in the presence/absence of EA-D IgG between the two groups nor in the corresponding P.I. levels. The results obtained, revealing higher seropositivity of EBNA-1 IgG and VCA IgG in MS patients, seem to concur with previous findings of studies in other countries, thereby further asserting the theory of EBV involvement in MS.
The results of this study should come as no surprise to anybody who reads the blog. Everyone with MS has been infected with Epstein Barr Virus.


You can’t find it…you are not looking hard enough seems to be the answer.


By “Herd immunity” this will protect the people who have not been infected with EBV and are more at risk of catching the infection. How would it do this?
Simple….by creating memory immune cells.


When an infection comes along, it is recognised by the immune system and the naive T and B cells have to expand and differentiate to be effector cells to get rid of it.


This takes 4-5 days for T cells and about 6 day for B cells, based on animal studies.


For infections you could be on deaths-door in this time frame or worse still, past the point where your immune system can deal with the infection and you loose the battle:-(
Look at the problem with Bird flu, Flu etc to see how devastating a viral outbreak can be.


The Flu of 1918 (Spanish Flu. It was hushed up in many places and the Spanish Press was the first to report the problem) killed more people (50-100 million people) than soldiers killed in the First World War.


Now there may have been special circumstances surrounding this problem  but you get the point that infections are bad news. Others include the plagues.
In contrast a memory cell responds immediately to the infection saving you time and maybe life.
We know that EBV makes memory B cells, which is where it lives and hides

EBV doesn’t infect rodents….they don’t get MS.
Could this infection help increase the lifespan of the immunity as it makes the B cell require less signalling to keep it going?
In tissue culture we use EBV to infect and immortalise B cells, so they last forever. Therefore it can make B cells last longer, in some cases this cases cancer. 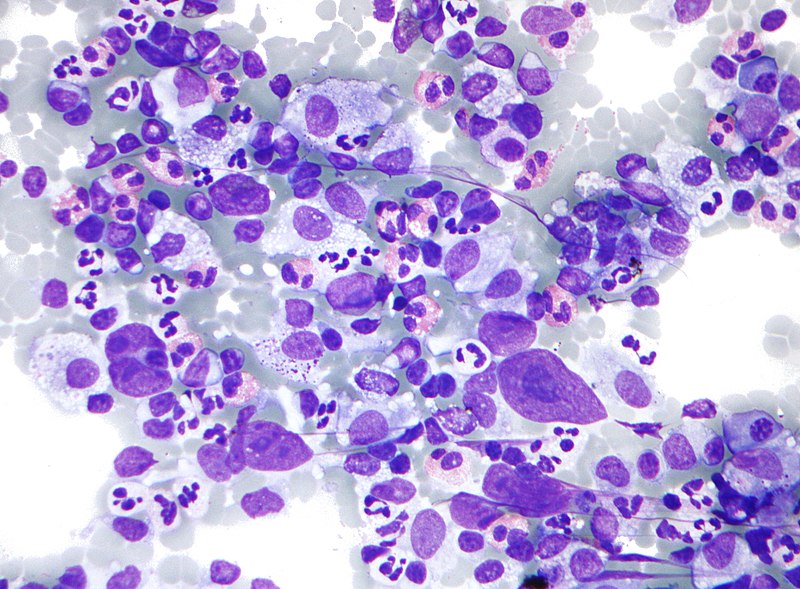 Then there is Burkitt’s lymphoma this is common in Africa, the Middle East and other areas where malaria is endemic. It usually presents in children 4–7 years old and in almost all cases is associated with EBV infection, in occurs in AIDS also.

Then there is Nasopharyngeal carcinome (a cancer of the nose and mouth) but is uncommon with about 1 in 100,000 people.

So EBV causes a rare cancer in youth.
How does EBV make memory B cells?


It infects immature B cells via complement receptors (CD21 and CD35) and uses the protein HLA-DR, which is the number one genetic susceptibility factor for MS and other autoimmune disease.


Once inside the cell it makes the cell grow and differentiate, so it produced interleukin-10 (yes this regulates T cells), which makes B cells grow and differentiate, it also makes latent membrane protein one (LMP1) and two (LMP2). These mimic the downstream activating signals produced by stimulation of the B cell antigen receptor (antibody molecule stuck on surface of B cells). 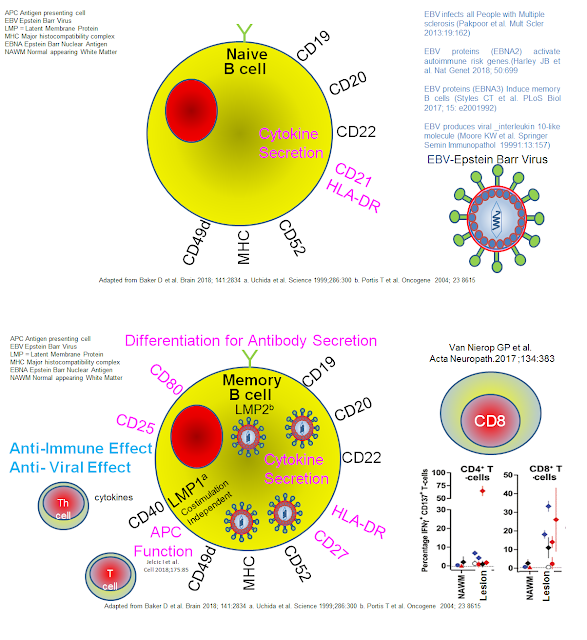 This is how it could cause a cancer by immortalizing it, however it makes the memory B cell (what it is programmed to respond to , will be removed quicker when it is encountered), and then the EBV virus normally goes latent and hides inside the B cells, whilst it is taken round the body. It then avoids being targeted by the immune system.

The virus doesn’t have to show itself until it gets back into the mouth to make infective virus. There B cell is stimulated to become a plasma cell and the virus  is shed, the immune system steams in and kills the virally-infected cells, but it is too late to stop infective virus being passed on to the next host. Therefore, the virus keeps itself going and infects the human population so it is happy.


As the cell divides to keep itself going, the EBV present in the cell cytoplasm replicates too.


Now some people think that MS is caused by the virus activating in the brain and the immune system enters the CNS to cause MS.


Many people do not buy into this idea and most can’t find the EBV virus in the CNS.


However, you can make the idea that other autoimmune diseases such as Lupus and arthritis have EBV at their core too.


So is arthritis because EBV is in the joint?


However the problem with this idea is that (a) we can’t find the virus in the CNS B cells in many people with MS and (b) if the target was EBV would we have MS one week, Lupus the next and arthritis the next after that?


This doesn’t happen I think, so there must be some specificity in the system.


However, we don’t have to have EBV in the brain for EBV to be a central problem.


If EBV has made a memory B cell that is outside its natural regulation then not only will some responses be enhanced to infections, it is likely that autoimmunity could be generated too:-(.

It appears that with time the virus may be lost as B cells divide and EBV is found only in about 1 in 50,000 cells.  The virus replicates itself when the host cell divides, but it appears that this is not 100% efficient and sometimes the virus drops out of the proliferating cells such that you can get a daughter cell that is not longer EBV-infected, but its mother was an EBV infected B cell.

This doesn’t matter to the host because it has made the memory cells to produce life-long immunity or in some rare cases autoimmunity. Therefore EBV  may give extra protection from infection without having to encounter the infection. This would give survival advantage to the human population.

Therefore, there is no MS gene, all the genes are perfectly normal and have come together to give enhanced responses to infection, but the down side is that these genes predispose one to autoimmunity.


Is this a reason why EBV is so endemic in the human population?


The human cost…..is a few cancers and autoimmunity.


Whilst MS is not that common and occurs in about 0.1% (1 in a thousand people) in areas of high incidence. The human race could afford to loose about 0.1% to MS and 0.1% to cancer if there was benefit to be had.


However, it is not just MS that has been linked to EBV and autoimmunity. Many autotimmunities have a link with EBV too.


But if we have benefit for about 92-93% of the population, would the human race care if it lost a few people to cancer and autoimmunity?


In addition, remember our history up to a few centuraries ago.


Child bearing age was in the teens and death would occur by a few decades.


Life expectancy in the Bronze age is suggested to be about 26 years
“17th-century English life expectancy was only about 35 years, largely because infant and child mortality remained high. Life expectancy was under 25 years in the early Colony of Virginia, and in seventeenth-century New England, about 40 per cent died before reaching adulthood.

EBV would have infected people at an early age (mononucleosis/glandular fever would be avoided) and so boosting memory cell responses in children would be good thing.


Now people are getting infected late in life and the immune repertoire is being developed in a different way and we have antibiotics, ceramic plates etc.


So autoimmunity which is generally adult onset was not a problem for the human race in history, it was too busy dealing with infection and life.  Therefore, there would be no selective pressure to get rid of EBV infection.

This is a global occurrence, but MS is not why?


This is because it is part of the answer, and your genetics and timing of infection will cast the dice in different ways. In the Western World we have changed how we are getting infected with EBV and so have changed how are B cell repertoire is being shaped.

MS probably develops because many people have a HLA variant (DR2, which is common in Northern Europeans) driving a CNS response. DR4 variant drives the response to the joint.


Is an EBV vaccine the answer, or maybe changing the way or age we become infected? The experiment needs to be done.


Want another example of how human populations adapt to infection?