As profG and NDG gear up to do a study to try and get rid of antibodies from the brain, I read with horror the latest effort of microbiome in animal models in a world premier journal.


It says plasma cells make MS better! So should we abandon the trial? I was worried so I thought I best have a look at the data.


As you know I don’t think that studies of B cells in mice tells us much and the data with B cell depletion with anti-CD20 is in my mind pretty useless. CD20 doesn’t target plasma cells.


But we know atacicept makes MS worse in some people and this doesn’t hit B memory cells and may make them worse, but it depletes plasma cells, which make antibody. Is this the answer


This forms the basis for the study. So maybe the plasma cell is all important


There are 5 main types of antibody called IgA, IgD, IgE, IgG and IgM. IgA (Immunoglobulin A) is usually produced at surfaces to prevent entry of infection. 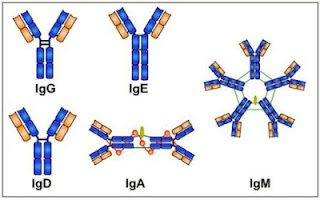 In this study they say plasma cells from the gut migrate to the brain and control autoimmunity by making IL-10.

So as it is the Journal Cell we are in for some pretty fancy science so where do we start. The have a mouse that the B cells change colour when they are activated and they others that mark plasma cells and they show that they accumulate in the CNS during EAE. Then they deplete plasma cells and they say that EAE gets worse.


At this point however I loose the will to live. Now you can give up here or if you are interested in the science you can read on


Let’s look at the effect. 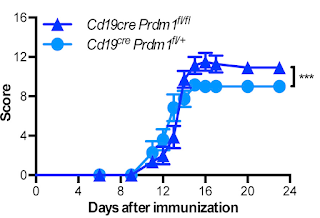 The blue triangles are higher but what does it mean?. The typical 4 point paralysis score is stretched to a 16 point score, I thought our 8 element score was stretching it, so a 9 and a bit goes to an 10-11 and a bit. What does it mean? I don’t know, because they don’t tell us in the paper, but they give a reference to another paper, which doesn’t tell us what it mean either….Great reviewing guys.


Get rid of antigen-activated plasma B cells and its worse 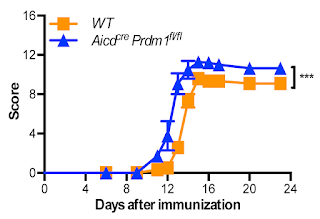 
The plasma cells really start to appear after the active action has happened (much higher around day 25) and presumably after the nerves are being sent to nerve-heaven. Many were not class switched but  in MS most B cells in CNS are class- switched.  As the plasma cells have IgA and most are from the gut they then transferred plasma cells from the gut into EAE and it was inhibited (you can guess by how much). Yep a lot.. with a statistically significant response as long as your arm, but based on groups with n=3 mice..Em 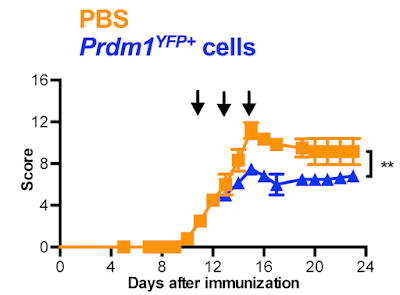 Then they do some experiments that I won’t go into details as they are abit gross, and suggest that IgA antibody producing cells from the gut response that can respond to gut bacterial can enter the circulation and get everywhere including the brain in EAE.

They then found bacteria that was bound by IgA in MS pooh. Interestingly, actively relapsing patients exhibited significantly lower percentages of IgA-bound gut bacteria compared to patients in remission indicating potential egress of IgA-producing cells from the gut during an inflammatory relapse. 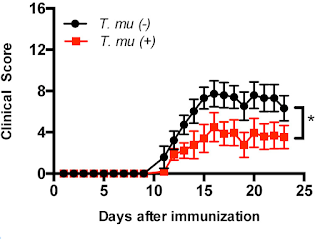 So clinical trials here we come. It should be simple change of a few gut bacteria and end of story one hopes.


I wonder how many trials will be done in MS and how many in other conditions also. Hope it works.


If this isn’t enough then is was shown it was all inhibited by IL-10, a B cell growth factor produced by B cells..I mean IL-10 which inhibits T cells.


Yet they haven’t finished and they look at a B cell activating factor over expression as this will make plasma cells survive and they get a lack of response, that even I am not going to question, in animals reported to be either so-called B cell dependent or B cell-independent EAE (One of the authors made idea up, not me).

They then looked at a BAFF receptor (TACI) to see if this may be a reason for an influence and the knockout mice (in B cell independent EAE) made things worse (or was it the wild type didn’t get good disease:-) and it works via IL-10. 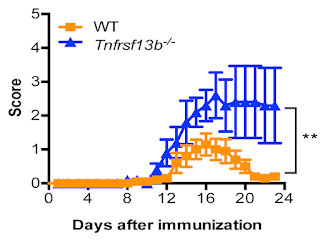 Wow told you it would be a ride. A massive amount of work, will it be repeated or maybe this is the repeat as people have got as far are the lymph gland.

B cells can suppress autoimmunity by secreting interleukin-10 (IL-10). Although subpopulations of splenic B lineage cells are reported to express IL10 in vitro, the identity of IL-10-producing B cells with regulatory function in vivo remains unknown. By using IL-10 reporter mice, we found that plasmablasts in the draining lymph nodes (dLNs), but not splenic B lineage cells, predominantly expressed IL-10 during experimental autoimmune encephalomyelitis (EAE). These plasmablasts were generated only during EAE inflammation. Mice lacking plasmablasts by genetic ablation of the transcription factors Blimp1 or IRF4 in B lineage cells developed an exacerbated EAE. Furthermore, IRF4 positively regulated IL-10 production that can inhibit dendritic cell functions to generate pathogenic T cells. Our data demonstrate that plasmablasts in the dLNs serve as IL-10 producers to limit autoimmune inflammation and emphasize the importance of plasmablasts as IL-10-producing regulatory B cells.

However, this is paper my “EAE cure of the week”.


Time will tell how it all pans out, but I have to say this is an alternative explanation of why atacicept  may have made MS worse. I quite like this concept.


Can it be relevant for MS?


Immunoglobulin A (IgA), the predominant immunoglobulin class in mucosal secretions, has been found in the cerebrospinal fluid of patients with multiple sclerosis (MS). In this study we examined the infiltration of clonally expanded IgA plasma cells in lesions of MS brains. Sequences of complementarity-determining region 3 of IgA variable heavy chain (V(H)) genes demonstrated the clonal expansion of IgA-bearing plasma cells in MS lesions. Somatic mutations and ongoing intra-clonal mutations occurred in their V(H) genes. Immunohistochemical study demonstrated infiltration of dimer and polymer IgA1- and A2-positive plasma cells in perivascular spaces, in the parenchyma of MS lesions, and in the adjacent white matter. Double immunofluorescence staining showed binding of IgA antibody on axons and walls of microvessels in the areas of chronic active and inactive demyelination. Bielshowsky’s silver impregnation revealed axonal damage in these areas. These findings suggest that IgA in the CNS are localized on axons in lesions and may contribute to axonal damage in MS. Immunity. 2014 Dec 18;41(6):1040-51. doi: 10.1016/j.immuni.2014.10.016. Epub 2014 Nov 4.
Paperpile

Maybe  ProfG and NDG will have us back to the bench to see where we are with the plasma cell inhibition and EAE.