We need to do more on education on MS therapeutics…it should not be more complicated but simpler as time goes by.

However, pharma and the old-world order like it complicated as it sells their drugs, when perhaps a few standard drugs in the tool kit would deal with most people and stop or slow brain loss immediately.

However, it is complicated isn’t it? 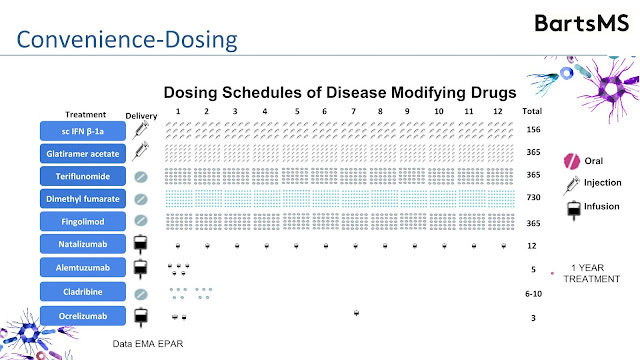 Since the introduction of the interferons in the 1990s, a multitude of different immunomodulatory and immunosuppressant disease-modifying therapies for multiple sclerosis (MS) have been developed. They have all shown positive effects on clinical endpoints such as relapse rate and disease progression and are a heterogeneous group of therapeutics comprising recombinant pegylated and non-pegylated interferon-β variants, peptide combinations, monoclonal antibodies, and small molecules.  However, they have relevant side effect profiles, which necessitate thorough monitoring and straightforward patient education. In individual cases, side effects can be severe and potentially life-threatening, which is why knowledge about (neurological and non-neurological) adverse drug reactions is essential for prescribing neurologists as well as general practitioners. This paper aims to provide an overview of currently available MS therapies, their modes of action and safety profiles, and the necessary therapy monitoring.

Yes there are so many choices.


They suggest that you need straight foward education are we doing enough to educate?
Recently DrK and I had a telecom with someone aiming to write a piece on MS and it was so interesting listening to the intonation of their voice when we were answering questions on B cells presumably because of ocrelizumab being recently approved. During the discussion of some theories it was clear that our responses came as a relevation to the person on the end of the line as it becomes simpler not more complicated.

This should be of no surprise to us, as our vision comes as a revelation to our colleagues too, maybe an irritation to others:-(

Maybe this is a year when we will become more evangelical (so it may help focus the mind of what practioners need in their tool kit).  We have made the point that all the treatments can do the same thing to different levels of competence and so if you look at efficacy, safety, convenience and consequence then I think dealing with MS becomes an easier process.

The consequence is the result of your descisions and the advice you get from your care team. If they are softly, softly and wait and see, which many of our colleagues are, remember the time is your brain not theirs!

Maybe we can do more educational sessions at international meetings, a platform in ECTRIMS, ACTRIMS or the AAN would be great…but is this going to happen when the jamboree is a marketing exercise?

I do have a few trips planned

However, if I asked you to pick a gun to shoot the same thing, which would you choose? 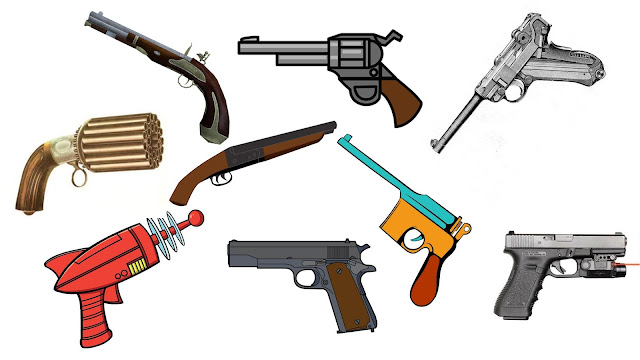 The pepper pot, dualing piston, semi-automatic or revolver? They all do the same thing with different accuracy and efficicacy. The sawn off shotgun, you point in the right area and blast everything and get collateral damage or the laser-guided pistol to know where you are shooting? Alternatively would you wait for the ray gun, which you think that will work the best but the technology is not properly developed yet and only works in the heads of some filmakers who have convinced you that it is the answer. However, the target has got bored waiting to be shot and has gone on holiday. Would you be one of the testers to get your hands on the ray gun first? Would you confuse the situation by asking if the target is static of moving?

I think the choice is easy.

You have your prefered choice and a back-up in case your gun jams and dig into your gun locker if needed.

We should be in the market for “Stealth technology” that targets the important mechanims  but we are not quite there yet especially because of the way people think and our lack of focus, however you are continually been sold “flint-locks” that often miss the target. Sadly this happens if you go to a knifeshop to buy guns, we need to make the shop assistants gunsmiths.