But what does it say to me?

In this study, patients with SPMS treated with rituximab had a significantly lower EDSS score for up to 10 years of follow-up and a significantly delayed confirmed progression compared with matched controls, suggesting that B-cell depletion by rituximab may be therapeutically beneficial in these patients. A prospective randomized clinical trial with a better level of evidence is needed to confirm the efficacy of rituximab in such patients.

Ocrelizumab has been licensed for the treatment of progressive MS, so the chances are that rituximab, which also depletes CD20-B cells will work too.

The pwMS group had a score of 5.9 and a similar control group had a score at 5.7 and disease duration was about 18 years. The results indicate that disability progression over a mean of 3 years (some people were followed for up to ten years) was reduced by about 50% P<0.001) and time to worsening was delayed by about a half too.

However we have to say, we are not told the basis of why people were treated with rituximab and furthermore MRI was only available for about 2/3 of the people and so the samples were not matched for potential lesion activity. However, of the people with MRI (26%) of 27/44 had active lesions verses 0 (0%) of 23/44 of the none-treated group. We know that lesion activity is a marker of response to rituximab, based on results in PPMS as shown in the phase II trial, and would have a biasing effect. Furthermore the people in the control group has recieved less DMT in the previous years in the run-up to the analysis and may suggest that thier disease was less active.

You would also say that the study was very small (Look at the figure and the number of people at 3 years follow up is very small). So to get an effect on EDSS is amazing. Just think what may have happened if hand function had been monitored?

Sadly they were not imaged and we can not say anything about brain atrophy as this imaging was not available.

Furthermore, the statistical analysis section was about as long as the results section indicating that a lot of juggling was done to get the final figures.

The other problem is we have no idea how long people were treated for. Rituximab is usually given every 6 months. How many doses were given. I suspect that you do not have to give every 6 months to get long-term benefit. If true it has safety and cost-benefit implications

Now our Friends in Sweden (where Rituximab is commonly used) should be able to do this study to replicate the results, but I think the replication data, or was it the initial data as it, was presented at the AAN about 2 years ago from work done in the USA. This showed that not as big an effect as there was a big slowing down of worsening (about 20%)
Neurology April 18, 2017; 88 (16 Supplement) The safety and efficacy of Rituximab Use in Secondary-Progressive Multiple Sclerosis (SPMS) at UMMHC: five years follow up data (P5.408)
Idanis Berrios Morales, Evdokia Eleftheriou, Louise Maranda, Letterio Politi, Carolina Ionete

Objective: Goals of our study were to: (1) assess the safety and tolerability of Rituximab in patients with SPMS with no relapse previously treated with DMT’s (2) measure the efficacy of Rituximab in delaying progression of disease using Extended Disability Status Scale (EDSS) (3) assess the effect of Rituximab on MRI measures such as T2 lesion burden, T1 hypointensities and contrast enhancing lesions.
Results: Patients in Rituximab group (n=40) had good tolerability with mild to moderate adverse effects, most commonly being urinary tract infection compared to controls (n=29). EDSS in the Rituximab group had a decrease probability of worsening compared to controls (HR= 0.787, [0.366–1.737] p=0.533). The Rituximab group had an increase probability of improving the EDSS compared to the control group (HR=2.836 [0.261–30.82] p=0.392). MRI metrics are currently under evaluation.
Conclusions: This study demonstrates the possibility of Rituximab as a DMT for SPMS without relapses due to its good safety profile and ability to reduce disability progression as seen in EDSS.
What does this suggest

We need a trial to test it
The idea that progressive MS does not respond to current DMT is untenable. So for the ostriches out there who think this…you know who you are!…Get your head out of the sand!!!.

To not do this will destine some pwMS to do worse The question of whether it is cost-effective is another matter and it you have a low cost option and you do not have to give it forever the answer is surely going to be yes… However, do we have to wait for patents to end. and hope the price drops to make it cost effective (it took about 30-35 years for copaxone patents to end and the cost went up and up and up and the generics are not much less) or go off-label? In socialized medicine where high-cost options may be restricted it will have to be off-label or nothing. Do we have the jajce?

However before we (neuros) start patting ourselves on the back and say how ace we all are, perhaps we need to look at the data, because the effect of monotherapy of DMT does not look good enough…We need combinations. 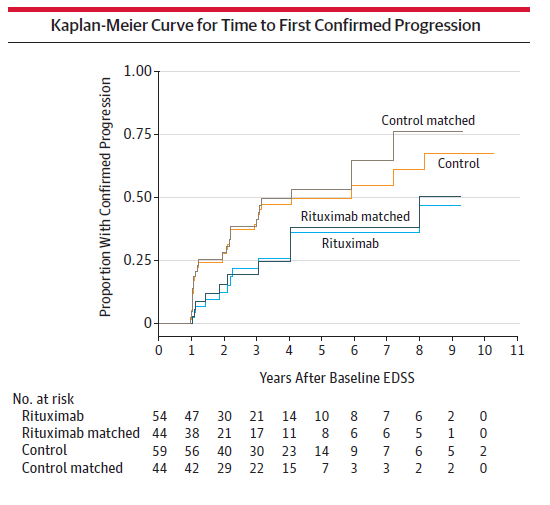 You can see that the proportion of people with worsening disease increases with time, suggesting that disability is getting worse and it is the majority of people who are getting worse.

Now you can ask if therapeutic lag is important and they perhaps should have rebased lined at 6 months to give time for the ocrelizumab to work, however it does suggest to me that.

Now you can say that the effect of the DMT is not good enough so we should find a neuroprotective that gives a better effect.

Any future academic trial that does not have a DMT at the bottom of the pack, is wasting time and your brain!!!! 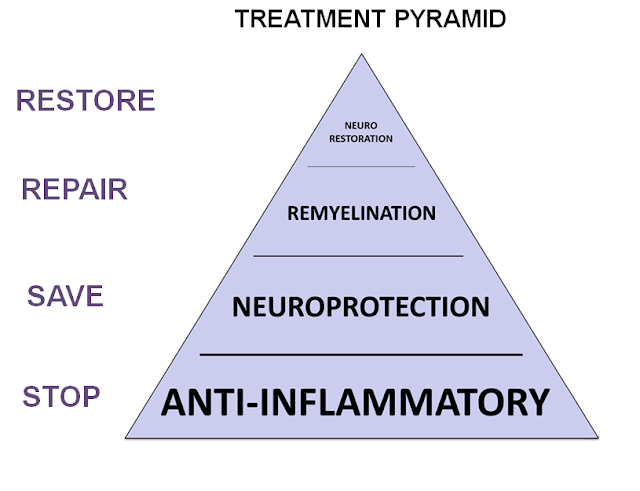 The jobbing academics are happy to do monotherapy trials because it is easy and it get the results that are easier to interpret and they can publish in a good journal (if it works..even if the effect is incremental as shown here) and do another trial (lasting 5 years?) in 6-7 years..then retire:-(.

In the 12 years you are waiting to see progress what has happened to your brain health. Won’t be good for some.

Will I be here in 12 years time saying the same thing?

Honestly I can say “no” to this.

I’ll be long gone I suspect, but the sad thing is I may be somewhere else thinking the same thing

To me it shows that we don’t read and assimilate knowledge!

The charities and other funders should not pander to this and if they have vision they need to be bold and say “Enough is enough people! Design the more complicated studies”.
However, will they?. I’m not so sure for two reasons.

1. Cost. As you have to buy the bottom of the ladder (DMT) for the trial. Nothing is licenced for this indication. However, they could go to company and ask them to supply drug for a study or be bold and use a generic. If they have to be larger the trials get more expensive too.

DrK has been struggling to get the costs down of his Wheelie Trial (#ChariotMS #ChariotX), which puts cladribine at the bottom of the pile. Although I am biased and conflicted, surely someone out there should see that this can be a ground-breaking opportunity and should chuck him a few “bob” and say “Add another arm and do cladribine + neuroprotective/repair agent or even be bolder  and have cladribine + neuroprotective & repair agents). If it works and there is benefit, you can do another study knowing that people benefit and they you change cladribine for another DMT on the bottom, which may be better such as rituximab, ocrelizumab, HSCT or alemtuzumab another generic or perhaps siponimod (Although in my mind immune-reconstitution therapies have more merit, it can be debated)

2. They (we) are simply not “thinking and learning” and advisors may be working to their own agendas and mind-sets (Is understanding the mechanism more important than developing treatments that benefit pwMS?).

I have been on a search party looking for neuroprotective agents that could be used in progressive MS. I spent some time preparing documents to support the logic and preparing the list of different B cell depleting agents that could be used. They were all dismissed and didn’t make the cut. The selection committee who got the reports appeared happier to pick agents that had absolutely no evidence that they could be of benefit in SPMS, but maybe had a sexier mechanism, than something that works in MS.


I guess that I am no different, as I am writing, or is it ranting, here from my own mindset. I believe it is a sensible view point based on my current view of the reality. Maybe I am living in a different world to everybody else as I don’t have rose-tinted glasses, is my face going blue?. 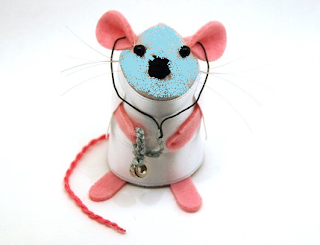 CoI: Multiple but none relevant..except perhaps after this tirade, I won’t be on any of the search parties 🙁