We have made the case that B cells are important targets for therapy.

However this seems to be rather an anti-establishment view, especially if you don’t say it is because the B cells are simply helping T cells.

“While substantial evidence suggests that MS is mainly a T cell driven disease, B cells play a non-redundant accessory role somewhere in the disease process. Whether this is through cytokines, co-stimulatory T cell activation or presentation of autoantigens is not yet clarified”.

It seems that too much speculation scares the average reviewer. Questioning the status quo is not going to be tolerated by the big swingers, who have created their reputation by making dogma that everyone must follow.

Ideas (unproven) seem to be the Vampire’s stake to a scientist! Speculation rocks the boat and we wouldn’t want change would we?

After all, if the data doesn’t fit the T cell and T regulatory cell mantra, we have recently sadly seen that some of the big swingers simply can just make it up, to say it does. Their reviewers don’t question this bad practise (The proof is there for all to see. Hung by their own hand). All you do is read the words and never look at the data to see if the words are supported.

It seems that as long as you spout dogma, there is no question about the validity of the data. Stray from this and some people proverbially, soil themselves. 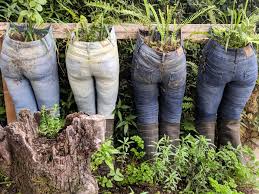 Is this scientists soiling themselves after they here an idea they don’t like?

So desparate are the reviewers to reject change, that they are happy to concoct some improbable story to ensure that alternative ideas don’t surface. (Sad but true)

Maybe the swingers are frightened that the lesser mortals (Those who don’t publish in Cell, Nature and Science every week) will actually believe it and then see that the Emperor actually has no clothes. They will do the experiments to show the idea is wrong but are more likely to accept if it is not-wrong.

Now there is one clear way that B memory cells can activate T cells and this is by presenting antigen to them.  I was chastised for not citing last years swingers paper saying that B cells present to T cells?  We can go back some way to know that.

However, I said we will have to address the nay sayers points as they appear. In the last couple of weeks I have had two questions.

I think the idea is because gamma interferon comes from T cells. It means that T cells are the problem.

The simple answer of why gamma interferon makes MS worse is because it activates damaging macrophages /microglia and it has nothing to do with B cells. Macrophages are the main cell types in MS lesions after all. I think there is a question on whether it triggered a relapse or simply worsened existing demyelination. ProfG has thoughts on this.

Could I find a reference where B cells make gamma interferon?. Sure I could, but does it seem logical to try? There are CD8 T cells in MS lesions, but the question is what brings them into the CNS in the first place. Could it be the B cells or does it have to be a T cell.

2. Next up, was a new one, so now we have the T regulatory explanation. CD20 depletion works because it makes T reg cells.

A referee (in italics) has said we are suggesting that “CD20 depletion seems to outlive the half life of the depleting antibodies and that this is likely due to long lasting depletion of memory B cells.”

Well not quite. If the supporting references were read then it would be clear that “The half-life of CD20 depleting antibodies (rituximab and ocrelizumab) is about 1 month, but because of the amount of antibody given it may take at least 6 half-lives for the antibody level to go below the level that depletes circulating B cells. So for rituximab it is about 6-8 months before the CD19 population replete and for ocrelizumab the median (middle)) time to repopulation is 12-15 months. As memory B cell repopulate slower than the total CD19 B cells, yes they will take some time to repopulation

But rather that take the easy explanation, we have to move back to the CD20-depletion works because of an effect on T cells.

So someone (in italics) has said “Interestingly, with rituximab and ublituximab, other B cell depleting monoclonal antibodies, have shown a shift in the Treg to Teffector ratio, which may be a factor in the longer lived therapeutic effect”.

In treatment of membranous nephropathy with rituximab, both Treg and CD56high,CD16low Natural killer cells were increased.

“As expected, B cell depletion was seen in the experimental group (rituximab 100mg + steroids) . In addition, both (steroids vs rituximab + steroids) groups experienced a significant up-regulation in Treg cell levels”.

OK this seems to suggest the CD56high, CD16low cell isn’t the culprit as it goes down in one study and up in the other.

B cell depletion with ublituximab reshapes the T cell profile in multiple sclerosis patients. Lovett-Racke AE, Gormley M, Liu Y, Yang Y, Graham C, Wray S, Racke MK, Shubin R, Twyman C, Alvarez E, Bass A, Eubanks JL, Fox E. J Neuroimmunol. 2019 Jul 15;332:187-197. Multiple sclerosis (MS) is a demyelinating disease of the central nervous system, thought to be mediated by myelin-specific CD4+ T cells. However, B cell depletion has proven to be an effective therapy for MS, but the mechanism is not well understood. This study was designed to determine how B cell depletion changes lymphocyte profiles. During a phase IIa clinical trial with ublituximab, a novel CD20 antibody, blood was collected from 48 MS patients at 11 time points over 24 weeks and the lymphocyte profiles were analyzed by flow cytometry. The percentage of naïve CD4+ and CD8+ T cells increased, while the percentage of both effector and central memory T cells declined. CD4+ Th1 effector cells decreased, while there was a significant increase in CD4+ regulatory T cells. The depletion of B cells had a favorable shift in the lymphocyte landscape, reducing the number of naïve T cells becoming activated and transitioning to memory T cells. The ratio of Th1 cells to CD4+ regulatory T cells declined, suggesting that immune regulation was being restored. These data suggest that loss of B cells as antigen presenting cells is a major mechanism of action for the beneficial effects of CD20 antibody therapy in MS.

Then the damming (smug) comment “an example where they (MD) really have little data to support their hypothesis and there are examples where effects on other immune cell populations may mediate long-term treatment effects”.

So we can have it that B memory cells are depleted with anti-CD20 (with ocrelizumab the data has not been reported) and it has been consistently found that memory B cells are depleted with all other agents that inhibit MS in an hierarchical way. This option can’t be accepted when it could be accepted that an increase in T regulatory cells is important?

Whilst we do not have the data of selective depletion of memory B cells in MS. Daclizumab that decreases T reg cells does not make MS worse.

Importantly it would be very, very, very surprising if T regulatory cells were not increased in these cited studies. This is because they are reporting percentages of cells present (in the studies above).

It is simple Understanding flow cytometry 101. If one cell type goes down the rest must increase. Likewwise, if one goes up the others must do down. It always has to equal 100%.

The person in italics are basing their views on percentages and not absolute numbers, or they just read the abstract which says Tregs increase, it fits with dogma..believe.

I have heard of Pavlov’s conditioning reflex  (Understand that cake is nice, see cake, salivate) is this the Lemming scientist’s reflex (Understand dogma, see dogma, Believe without question) or is (understand dogma, unproven idea, soil pants:-) and reject).

OK.Yes I am a whinger

CD19 B cells may make up 10-20% of the lymphocytes and as they are being wiped out T regulatory cells will increase. However, you can only say T regs are increasing if their absolute numbers increase.

Using this approach the 3-13% increase in percentage T regs (hence the claim in the label) after alemtuzumab is actually an 80-95% decrease in absolute numbers.

But remember what I say. Look at the data and not the text and see if it passes the smack you in the eye test

So what actually happened to the T regs in the MS paper cited against the B cell idea? 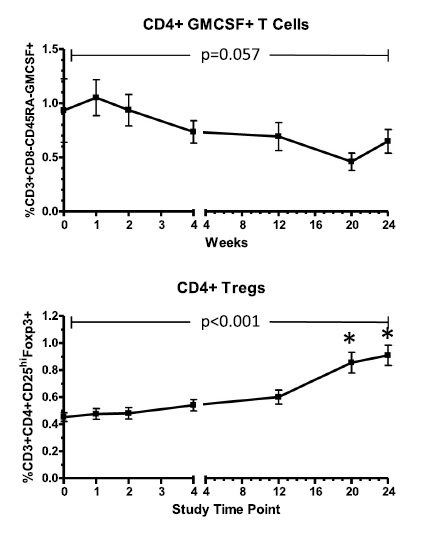 Wow. I said wowza staggering increase that takes 20 weeks to be significant.  The  memory B cells are destroyed within a day and rituximab is active pretty quickly in MS, verses an apparent increase that takes months. I don’t know about you but it does not seem the most obvious thing to buy

Also of interest look at the CD4 GM-CSF T cells that last week were implied to be the big problem in MS, so rituximab does not do much to them. MS relapses go away

Importantly, if you look at absolute numbers of T regs what happens?

Well you guessed it…. nothing. 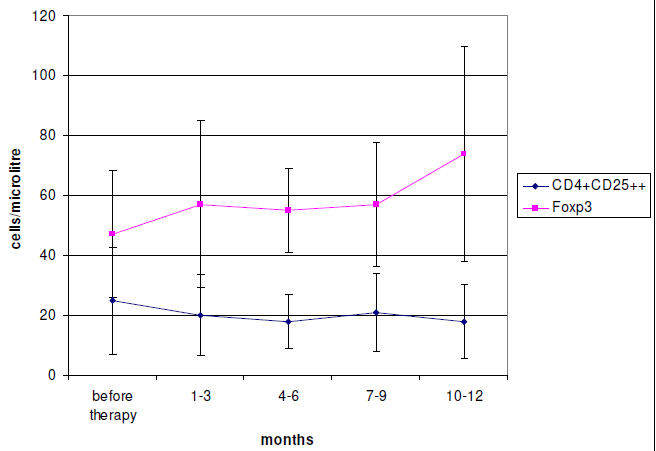 So if you want changes in T cell balance as an explanation, sure it is possible, and I will be presenting this at ECTRIMS2019.

However, is it the most logical? You make your mind up.

I still think we should see what happens if we selectively get rid of memory B cells or do we bang on with CD4, TH17 immunotherapy?.